Click on the link above for the PDF version

No. 407 [Demon] Squadron RCAF was formed at Thorney Island, Hampshire, England, 8 May 1941, as the second Canadian coastal squadron formed overseas. They first flew as a Coastal “Strike Force” in Blenheim Mk. IV [training only] and American Lockheed Hudson Mk. III and MK. V [in June 1941], carrying out attacks on enemy shipping between the Bay of Biscay and Heligoland. The term ‘strike’ was applied to all operational aircraft in RAF Coastal Command which carried bombs or depth-charges on regular patrolling or for attacks on special targets, enemy shipping or German warships. These aircraft first flew in markings of RAF day bomber markings with assigned RCAF aircraft unit code “RR” for 1941-43. These surface markings began to change from temperate land colors to temperate [Coastal White] beginning in March 1942.
On 29 January 1943, No. 407 Squadron was re-designated General Reconnaissance, flying Vickers Wellington Mk. XI, Mk. [Feb. 43] XII, [March 43] and Mk. XIV in June 1943. This was the second part special history of the Canadian 407 Squadron [U-Boat Killers] as they now flew Vickers Wellington [L.L.] aircraft which were painted Coastal White and were equipped with Leigh Lights for secret night enemy anti-submarine operations.

RAF No. 1417 Flight was formed at Chivenor, Devon, to develop the Leigh Light Wellington aircraft and to form the nucleus of No. 172 Squadron, the first RAF unit to use the new aircraft. Four months of intense training began in February 1942, and on 3/4 June 1942, four Wellington took off on their first operation and the Italian submarine “Luigi Torelli was surprise in the dark and damaged. The [secret] success of the Leigh Light Wellingtons would continue until the end of WWII, [Europe] 8 May 1945.

In 1944, No. 407 began to use the code number 2 with assigned aircraft letter, however it is not recorded officially in any records the author can find. This image from the Imperial War Museum [FLM1995] captures Wellington “P” serial MP774 with No. 179 Squadron and the remainder are from No. 407 [Demon] Squadron with code number 2. Aircraft C-2 is serial HF127 and A-2 is MP587, while the other aircraft carry the codes together such as 2J which could possible be serial HF171 or NC512. Very confusing photos still exist concerning the markings of aircraft code letters used by the RAF during the war years and at times only a general rule can be expressed. Most No. 407 Wellington [Leigh Light] aircraft carried the “G” after the serial number and the [L.L.] in record books but the use of number 2 is still confusing. [Any info. would be appreciated by the author] 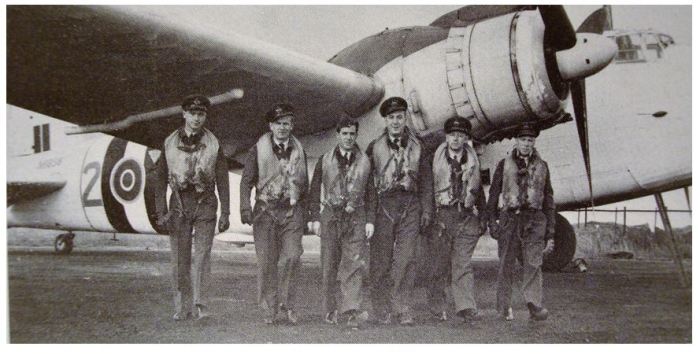 Rare RCAF No. 407 nose art which also recorded each operation [eleven] with the same nose art replica painting. This Wellington Mk. XIV, NB811 completed twelve operations between 6 July 1944 to 26 September 1944, force landed on the coast of Norway, in German occupied territory. The Canadian crew escaped back to England thanks to the Norwegian Underground. This image was taken after operation #11, between 13 to 25 September 1944.

Due to the “Top Secret” classification, the contribution of the Leigh Light Wellington bomber in attacking enemy submarines was restricted and received very little wartime publicity. It took forty years for the true history to emerge in regards to the significant part the [L.L.] Wimpy played in Coastal Command and the defeat of German and Italian U-Boats. They seriously damaged at least 51 submarines [212 U-Boats were sunk 1942-45] in recorded attacks and saved countless possible attacks on merchant shipping convoys, which were vital to the whole war effort. Two Canadian RCAF pilots were involved in the original RAF No. 1417 Flight [Wellington] testing in early February 1942, plus the actions of No. 407 [Demon] Squadron [1943-45] have almost been forgotten with the passage of time. The most vital ingredient to their success was the invention of the Leigh Light, a moveable swivelling searchlight which operated remote from the pilot and cockpit.

The Leigh Light was proposed by Squadron Leader H. de V. Leigh, who took his idea to the C-in-C of Coastal Command, ACM Sir Frederick Bowhill.

The idea was first tested [March 1941] in a Wellington [magnetic minesweeping] aircraft which had a generator installed. RAF No. 172 Squadron was next formed at Chivenor on 4 April 1942, for the testing of the Leigh Light Wellington Mk. VIII, and flying the first Wellington [L.L.] operations in WWII. 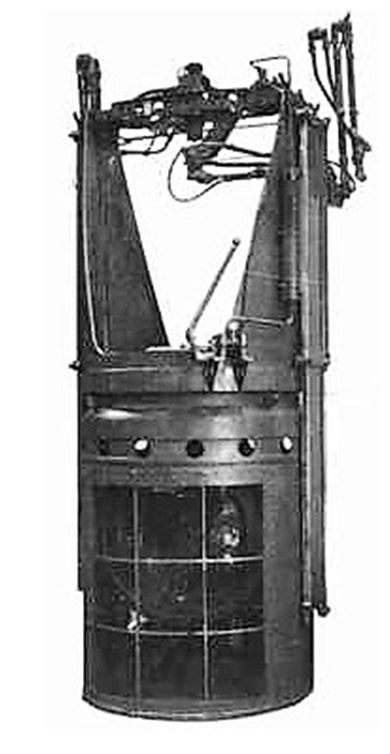 The Leigh Light was a 22-million candlepower, 24-inch searchlight manufactured by Savage & Parsons, which was installed in a retractable section under the middle fuselage of the Wellington aircraft. This was called the “Dustbin” by the RAF and was a super hush-hush “Top Secret” invention in January 1942, thus protected by a 24-hour guard while on the ground. All Wellington aircraft equipped with ASV Mk. II Radar and the [L.L.] received the letter “G” [Guard] at the end of the aircraft serial number.

This original Leigh Light is preserved in the RAF Museum at Henden, as it would have been installed in a Frazer Nash FN77 gun turret.

This British Vickers Armstrong ad was based on the real attack by RCAF No. 407 [Demon] Squadron Wellington MP578, 10/11 February 1944, when German U-283 was destroyed, and a large dull red glow was observed under the submarine. Published in “Evening Standard” 25 May 1944. The true under fuselage location of the Leigh Light was top secret and could not appear in this censored British drawing.

MP652 was lost on her third operation, 29 April 1943. The bomber crashed into the sea at Morte Point [meaning Death-Point] which is famous for numerous ship wrecks. Morte Point is on the north coast of Devon, near the seaside resort of Woolacombe. No. 407 Squadron first U-Boat kill came on 6/7 September 1943, when Wellington Mk. XII, serial HF115 destroyed German U-669. 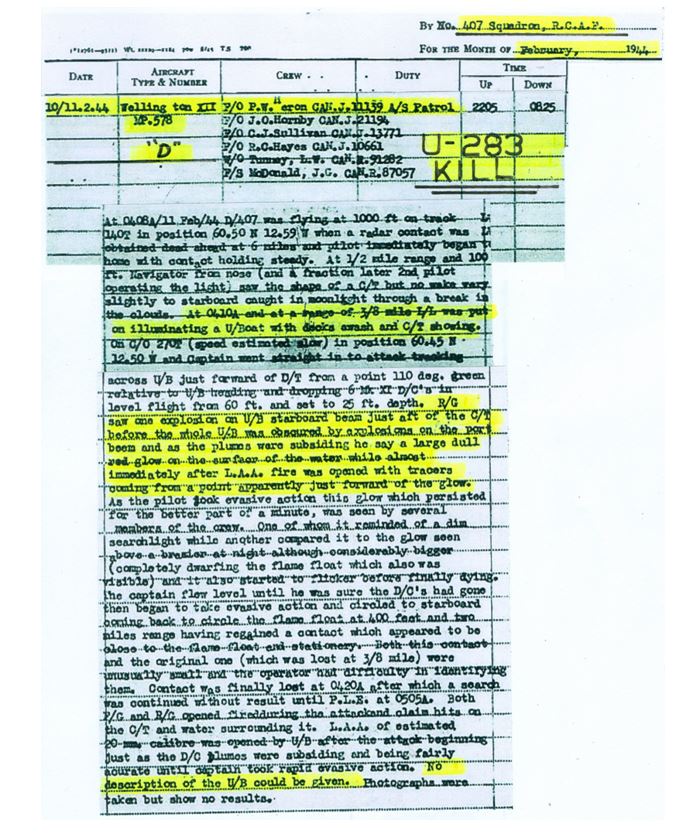 No. 407 [Demon] Squadron flew 1,987 anti-submarine sorties, dropped 331, 250-pound depth charges, destroyed four enemy U-Boats, and damaged three U-Boats. They lost 42 aircraft, 197 aircrew members, of whom 24 were confirmed killed in action and 151 presumed killed, no body was ever recovered. Another 64 personnel were killed in non-operational flying accidents. The squadron was disbanded at Chivenor, Devon, on 4 June 1945. 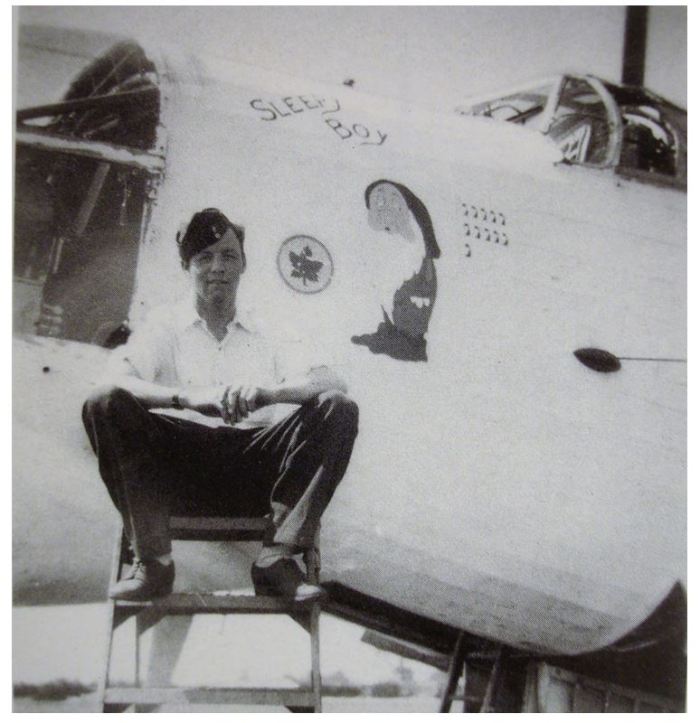 This is LAC Norman Hughes, No. 407 Squadron ground crew member who painted the rare Coastal Command Wellington Mk. XIV, serial NB811 [L.L.] nose art, but nothing else is known about the artist. Author collection from Leo Tiberio, [gunner] No. 407 Squadron. Norman had no idea he was painting a Wellington aircraft whose aircrew would make some unusual RCAF escape history. 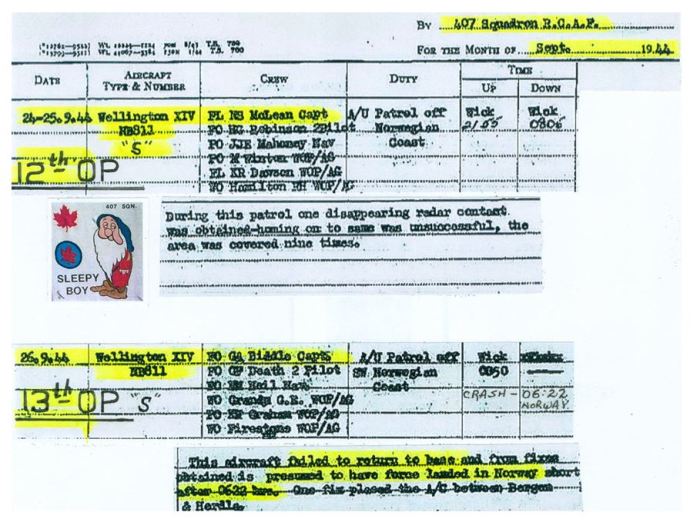 On her 13th operation, Wellington “Sleepy Boy” developed engine trouble and around 06:22 hrs. force landed on German territory in Norway. The German guards did not notice the landing [morning shift change] and the crew not only destroyed the secret radar equipment, they escaped back to England, [arriving 13 October] thanks to the Norwegian underground. 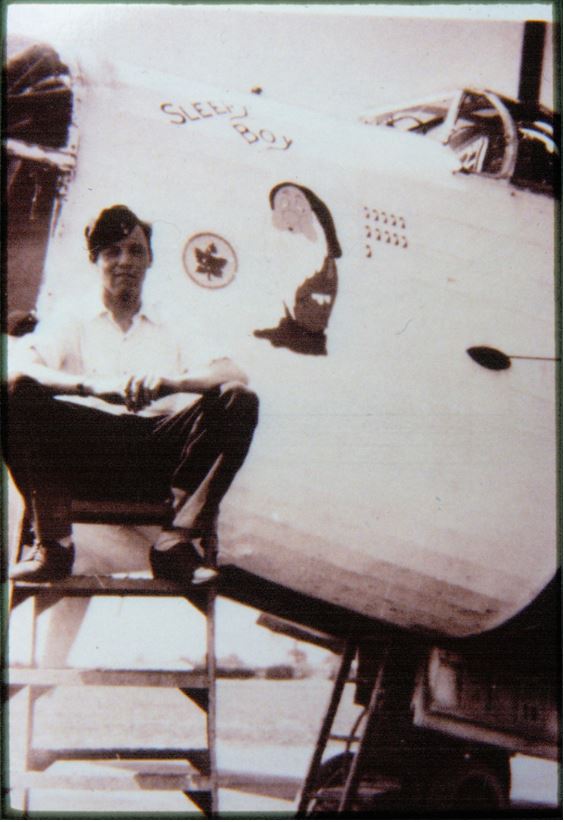 Preserving the Past – The V-2 Rocket

Clarence Simonsen has been preserving the past more than 50 years. He has finally gotten recognition for his research on the V-2 rocket.

The original research of Clarence Simonsen on the V-2 rocket

Dr Philipp Aumann sent Clarence three photos of the exhibition and one photo of himself. The book he wrote on the exhibition can be bought at the museum shop.

This is the link to the museum shop:

Both sites are just in German, but the book itself is bilingual.