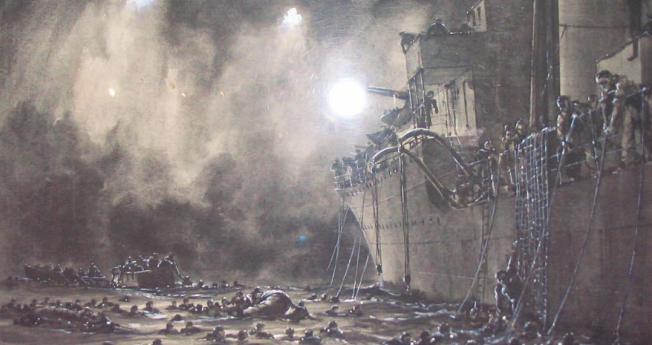 I don’t have anymore spare to add photos or documents on Lest We Forget. To continue on your quest for the Fallen you need to click here.

My husband’s Uncle was William Donald McCrindle. He is one of the missing men from that fatal night. We are going to France next week and making our way to Roscoff, Isle de Batz and area by end of month. He will be the first of his family to go to Donald’s final resting place. Donald was very close to my husband’s mother and his last letter was to her. Overwhelming to finally have family go.

I was just starting to write about something I had never heard about. What made me write about the sinking of the Unlucky Lady was something my wife’s uncle told us at a family reunion in July 2009.

I just got curious…

MCCRINDLE, William Donald, AB, V-1854, RCNVR, MPK – 29 Apr 1944 – MISSING: AB William Donald McCrindle, 23, son of Mr. and Mrs. W.J. McCrindle, Nipawin, was reported missing after the sinking of the Athabaskan in a channel engagement last week. He was born at Codette, Sask., educated at Pontrilas, and enlisted in the navy at Saskatoon in 1942. About six months ago he was posted to the Athabaskan. Besides the parents there is a brother, Barry, at home; two sisters, Cora, at home, and Mrs. J. Clarke, at Choiceland, Sask. (The Regina Leader-Post 08 May 1944)