This is the story of the sinking of HMCS Athabaskan G07.

I have started writing an English version of my French blog on the Athabaskan because so many English speaking people have helped me yesterday in my reseach. It is the least I can do for these wonderful people.

My wife’s uncle says he was a sailor working in the engine room of the Athabaskan.

He does not want to talk more about it… like so many veterans. 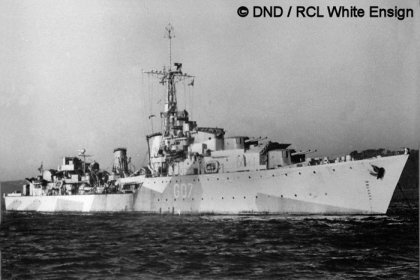 This is what Jerry Proc wrote on his Website.

In September 1939, the RCN decided to order new ships to replace the old destroyers previously transferred from the Royal Navy (RN).

The RCN preferred the Tribals with their heavy gun armament because they wanted to take the war to the enemy instead of relying on purely defensive vessels.

Originally all of the Tribals were to be built in Canada but this was not practical at the time since Canada did not have an extensive ship building industry.

The British Admiralty agreed that the UK should build the first ones and they also acted as agents, arranging for the Canadian Government to buy the Tribals by a system of direct instalments while Britain paid cash for the corvettes being built in Canadian yards for the RN.

After her commissioning on 3rd February 1943 at Newcastle-on-Tyne, she was assigned to the British Home Fleet but ATHABASKAN was plagued with mishaps during her very short service life.

This took five weeks to repair at South Shields, U.K.

In June 1943, ATHABASKAN took part in Operation Gearbox III, the relief of the garrison at Spitsbergen.

On June 18, she collided with the boom defence vessel BARGATE at Scapa Flow, resulting in a month of repairs at Devonport.

In July and August of 1943, she was based in Plymouth, carrying out anti-submarine patrols in the Bay of Biscay and on August 27 was hit by a glider bomb off the Spanish coast. She managed to reach Devonport where she remained under repair until November 10.

Returning to Scapa Flow in December, she escorted convoy JW55A to Russia but in February 1944, rejoined Plymouth command and was assigned to the newly formed 10th Destroyer Flotilla.

On 26th April, she assisted in the destruction of the German torpedo boat T 29 in the Channel off Ushant and three days later on 29th April, was sunk by a torpedo from T24, an Elbing class destroyer, north of the Ile de Bas.

Her Captain, John Stubbs and 128 men were lost, 83 taken prisoner and 44 rescued by HAIDA.

My wife’s uncle was one of the crew…

When I started my blog in French, I found the story on the Internet.

The text is in French and is part of a book. The author is Yves Dufeil and he gave me permission to use it in my French version of my blog.

If you have war memories of some of your relatives and you want to share them with me and my readers, click here to write to me.

Next time, I will talk about the wonderful people who helped me yesterday.

You can write to me by clicking here.

A comment from a reader who found this blog…

Thank you Sir for the information on my Father. Dear Old Dad was a fantastic “Pilot”…but he “landed” a few times around the world. Since 2000, I (with help of ex-wife) have discovered 2 half-brothers (of which I am one), and 3 half-sisters (one in England) all fathered by Bill! Those are just the ones we know about…still searching!
The five of us get together yearly for a reunion and to seek new info. Your information has been a great help in knowing our Dad. Thank You Again.
Kc (Rolf) Stangel

What about William Stangel?

You can search this blog by clicking here.