Spring is here and I am getting busy. Here is a change of pace story, that proved to be very important in saving RAF and RCAF lives during WWII. The power of cartoons is sometimes forgotten, but their image remains forever in the mind and helped prevent stupid flying accidents. It’s amazing that stunting for a girlfriend, cost a number of pilot lives !

There is usually an airman in a Squadron who possesses some measure of cleverness with a brush. It is his job to paint the emblems and mascots of various pilots on the side of their planes. Sometimes the pilot suggests one himself, sometimes the artist suggests one: if he does and it doesn’t prove so lucky he better not be around when the “pilo” gets home. No doubt this strange trade has its opposite number in the German Air Force, but judging from our squadrons score last year, it must be a pretty discouraging job. We know what it’s like to spend a frosty morning blowing one’s fingers to retain some warmth to paint a Kiwi rampant on a field of oats, and if the plane “went for a Burton” the next day it would have been a most discouraging business. The squadron artist is guilty also of those somewhat risqué sketches adorning the walls of the pilot’s rest room, which show a healthy interest in feminine pulchritude, quite in keeping with the average “Erk”.

Far too often the RCAF aircrew in WW II received all the hero status and glory, while the role of the ground crews was overlooked by the media and movies. The RCAF Erks [rank below that of corporal] of WW II attended the specialised technical school at St. Thomas, Ontario and passed special apprenticeships before they were posted to an active squadron. No. 1 Technical Training School graduated 50,000 men and women for wartime service. Some of these ground crew processed varying degrees of artistic talent, and they would paint aircraft nose art in squadrons of the RCAF and RAF.

While conducting hundreds of interviews with ex-ground crew, I learned single men were often posted to the most remote stations of the RCAF in Canada, where they were supervised in their new chosen trade. This appears to be the only division in the ground crew early training and after six months they were posted to an active Canadian squadron or directly overseas. At this point they generally knew intimately the workings of the aircraft and technical know-how of all aircraft systems. These ‘Erks’ worked long and hard hours around the clock, in the changing temperatures of the great airfields located all over the world. In their spare time many of these Erks painted unofficial nose art on the Squadron aircraft. During my research of 40 WW II RCAF and RAF nose artists, I found 16 held the rank of L.A.C., 3 were Corporals, 10 were Sergeants, and 11 were Commissioned Officers. Thirty-four of these men were Canadians and six were British.

I believe it is fair to state 65 to 70 per cent of WW II RAF and RCAF nose art was painted by ground crew members and most were Erks or Plonks.

The following story appeared in a 1942 issue of Punch magazine in England.

They Just Let Me fly It

There is a collection of notable efforts by ground crews in our files. But it isn’t only the outstanding jobs that they build up the service. It is the routine, reliable, steady graft, as they say up North, that makes flying secure from preventable faults. “Preventable” is the operative word, said a veteran friend of mine; veteran in all its meanings. He is a Grouper now, and has flown bombers, fighters, and night fighters.

“What I want to be sure of,” he said at Group Headquarters one day, “is that my bus [he objected to word ‘kite’] is as fit as good men can make her. They don’t need to think what the Hun is doing; only what they are doing and that we rely on them when we are airborne.

He has a few ribbons. “Shared,” he often said, “with the people downstairs who make them possible.”

Whether it is in the United Kingdom or overseas, the same high traditions are maintained by ground crews. I have seen these people at work, and I have seen them at play. I have seen them on their own, and when their pilots have come to talk, and they are an amazing lot. They hide behind stock phrases and expressionless faces. They have the habit of understatement and pretence at stolidity; but they are among the most imaginative, most resourceful of all people.

Should anybody doubt the truth of that statement, let him come, sometime or other, to an RAF station. Let him watch the kites go up, and then, unawares, he may hear a tough Yorkshire type mutter in an aside …..”MINE!” As he opens his first two fingers rather wide behind his back. If the mood takes him, he may swear. But swear or not, he will always grin. He is a humorist.

Anthony Armstrong created the most famous WW II character Pilot/Officer Percy Prune #89008, who was introduced in the first issue of the RAF Training Memorandum [Tee Emm] on 1 April 1941. In cartoon form P/O Prune demonstrated all things that could go wrong if RAF procedures were not followed correctly. The misadventures of this clueless clot would teach thousands of young WW II pilot’s safety issues and possibly saved just as many lives. The P/O Prune finger also produced a special award – “Most  Highly Derogatory Order of the Irremovable Finger.” Halifax Mk. III, serial NR199 served with five RCAF squadrons and for this she received the “M.D.O.I.F. award as nose art. 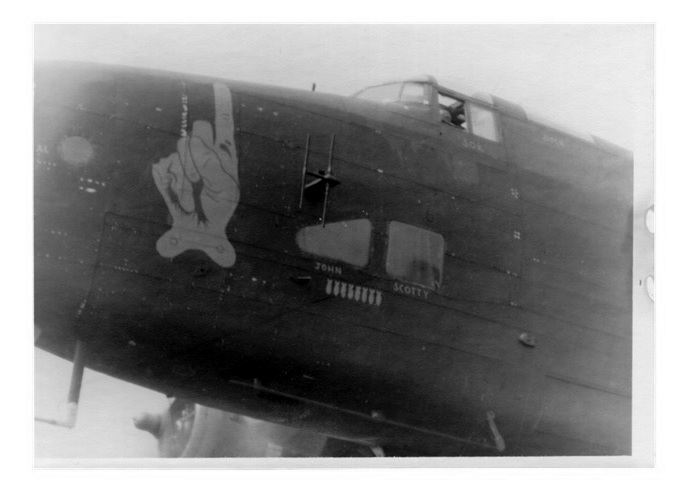 In each issue of the Tee Emm, the winners of the “Most Highly Derogatory Order of the Irremovable finger” were published in the column titled ‘Without Comment,’ using the actual Air Force pilots names and events.

His face would also appear as nose art on many aircraft, including the poorly researched and half painted RCAF Lancaster KB944 in Ottawa. This proud Lancaster has the face of P/O Prune, but sadly has been painted incorrectly for almost fifty years, with no sign of change from the bureaucrats in charge.

Another wonderful book was published by Anthony Armstrong which showed all the RAF ranks and special wartime RAF terms.

The book was titled – “Nice Types” and began —–

“SPEAKING GENERALLY, the Royal Air Force is all nice types. Speaking particularly, some are nicer than others. Speaking even less particularly, others aren’t as nice as some; but you can only mention this to them if they are of junior rank to yourself. If they are senior, it’s best only to think it. Thus No. 977949 Aircraftsmen, 2nd class, Plonk, whose rank is junior to anyone else in the whole Air Force – is never able to open his mouth on the subject.

But he does a lot of thinking.

These are the ground crew A.C.2 Plonk’s which appeared in the book “Behind the Spits” October 1941, by Anthony Armstrong.

Flight Mechanic [Airframe] Usually known as a Rigger, in charge of the outer part of the aircraft, repairing slits, cuts, and damage to outside.

Flight Mechanic [Engine]. Is responsible for the efficiency of the engine.

Wireless Operator Mechanic. This, a breed of its own, is often heard to be making funny noises into the microphone.

Armourers. The most placid specimen of airmen, nothing short of a thousand-pounder will cause him to more than blink.

From the very beginning of World War Two living and messing conditions in England varied considerably depending on which station you were assigned. The pre-war British stations offered a standard that reflected highly on the officers with private rooms, bat boy, and what would be considered normal living conditions. The new war time constructed buildings were mostly the hated Nissen huts, which were always cold, damp, long rows of bunk beds, no running water, and unsatisfactory sewage system full of rats. The ground crew’s straw filled pillow, flat mattress, combined with the lack of proper personnel hygiene, played a major effect on the morale in each different squadron. In some cases this was corrected by squadron commanding officers, but for the most part ground and air crew had to adjust and do the best they could. Most ground crew spent long hours working on their bombers and many constructed a home-away-from-home dispersal tent on the hardstand, next to the aircraft hardstand area. These provided shelter from the British harsh climate and also contained tent art.

The RCAF ground crew [Plonks and Erks] in England constructed their own bomber dispersal tent structures near the aircraft they worked on. No. 419 [Moose] Squadron was formed on 15 December 1941, at Mildenhall, Suffolk, England. This 1942 photo records the dispersal tent art for the Vickers Wellington Mk. III, “O for Orange” serial Z1083. The Erk squadron artist has painted some risqué nude ladies on the tent walls, which show a healthy interest in feminine pulchritude. Note – the artist has also recorded the names of the crew who fly his Kite on operations.

This No. 419 Dispersal Tent art taken at Middleton-St.-George in 1943 was directed at Sgt. D.M. Macpherson who was the only Australian member in the Canadian aircrew. The aircraft was Halifax Mk. II, serial JD158, code VR-H and named “Have Another”, with nose art of Kangaroo carrying a 500 lb. bomb. This Halifax was shot down on 17/18 August 1943 during the famous raid to bomb the V-2 site at Peenemunde, Germany. Killed was the crew of F/O Stanley Heard, from Saskatchewan.

The ground crew names that kept “Vicky” flying, painted on their hardstand hut.

This “Goldfish” ad appeared in the 2 April 1943 issue of The Aeroplane magazine. 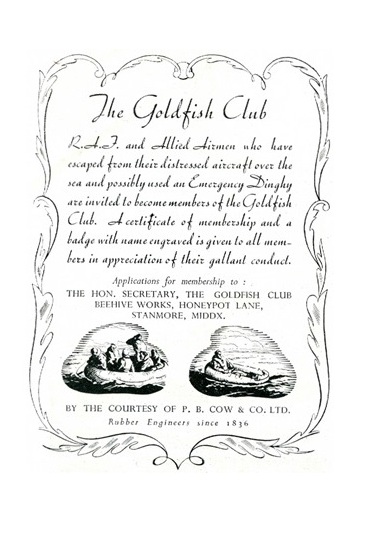 On 13 September 1942, F/Sgt. Russ Harling was rear gunner on the crew of Pilot Sgt. A.J.A. Cameron, No. 419 Squadron. The Wellington Mk. IC, serial X3308, code VR-O, was damaged by flak on the operation and had to ditch in the North Sea. One of the crew drowned and five were rescued by boat.

Again on 27 February 1943, rear gunner [now P/O] Harling was a member of the F/Sgt. Gray crew when they ditched in the North Sea flying Halifax DT615, VR-P. All crew were rescued and the Halifax was sunk by Royal Naval gunfire due to the fact in was drifting into a sea mine field.

P/O Russ Harling was the only member of No. 419 [Moose] Squadron to ditch twice in the North Sea and twice became a member of the Goldfish Club.

On 20 July 1943, Russ Harling was given a third special award by his ground crew, when they painted his last ditching on their dispersal tent shack. The aircrew had a 2nd Dicky pilot on board, so eight aircrew appear in the tent wall art. The beards stand for the many hours they spent in the dinghy before they were found and rescued.

This painting from the publication “RAF Parade”
October 1944 shows the many types of the WW II RAF.

25 thoughts on “The Squadron Artist by Clarence Simonsen”