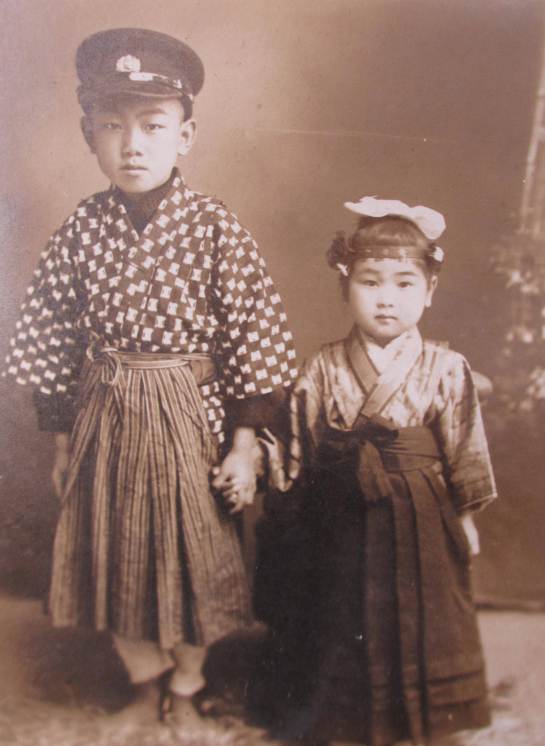 Uncle Yutaka and darling little Aunt Michie in Hiroshima. Circa 1918.

Life in Hiroshima was uncertain and grueling in 1945 – especially for women and children.  It is a fact that nearly all the men up to the age of 35 had been taken by the Japanese military.  For many, it was truly day to day.

Little food, clothing and medical care.  It all went to the military…and then there were the B-29’s and the bombings.  Devils associated with being on the losing side of war.

But at 8:15 AM on August 6, 1945, my Aunt Michie’s already tough life would be cast into wretchedness to test her mortal soul.  She was in her farm’s field clearing old crops on that hot summer morning.  There was an intense flash of light then the atomic bomb’s shockwave traveling close to the speed of sound slammed into her.  She was catapulted and…

Excerpt from this Webpage

Harry was one of only 10 survivors when MTB 622 was lost off the coast of Holland on the night of March 9th/10th 1943. Severely injured, he was rescued by the crew of the German naval craft VP 1300, spending many months in Dutch and German hospitals before being incarcerated in a POW camp deep in Germany. Still suffering from his wounds he, with three others, decided to try and escape from the POW camp after hearing of a proposed forced march of the inmates deeper into Germany.

The news that Harry Leader had ‘crossed the bar’ and now rests in calmer waters was received with a great sadness.

There will always be very warm memories of Harry; having then only very recently been discharged from hospital, he had appeared to be his old self, even after quite a prolonged stay; but true to his character he did not disclose any details of his suffering or illness.

Harry will certainly be missed by all those who knew him—especially those members of the London Branch Committee—who sometimes were the butt of many ribald comments emitting from the irreverently titled Stokers Mess. He, being an active and leading member of this group, had the ability and wit of always being able to find a quick and humorous remark for whatever was being discussed at the time, sometimes raising a smile from his selected ‘target’—but his banter was always made without malice.

His broad cockney accent assisted his particular brand of charm, this also added to an ability to display a very warm nature and great love of being among those whom he called his ‘shipmates’.

Although being a fully paid up and active member of ‘our Stoker’s Mess’, Harry was not a member of the Engineering Branch of the RN. He had ended his naval career as an A/B Seaman having been awarded the Distinguished Service Medal.

Harry was one of only 10 survivors when MTB 622 was lost off the coast of Holland on the night of March 9th/10th 1943. Severely injured, he was rescued by the crew of the German naval craft VP 1300, spending many months in Dutch and German hospitals before being incarcerated in a POW camp deep in Germany. Still suffering from his wounds he, with three others, decided to try and escape from the POW camp after hearing of a proposed forced march of the inmates deeper into Germany.

After several hair-raising ‘incidents’ they managed to reach the advancing Allied army. Harry was to feel the generosity of the American troops for a number of weeks before eventually being repatriated back to the UK.

For many, Harry will be remembered as a true friend, but also it should be remembered that he stands among the ranks of this country’s heroes.

He will be sadly missed by his beloved wife Gwen, his son-in-law, grandchildren and great-grandson Harry.

At first I had found some information here about MTB 622 when I began my search.

It was not enough to satisfy my curiosity.

So I looked for more information to find more clues.

More again about a sailor aboard MTB 622…

This information about Ordinary seaman Daniels led to this one…

The oldest known member to have died while in service with Coastal Forces is Stoker 1st Class Richard Thomas Rusbridge of HMS Hornet, who was aged 63. The youngest known casualty was Ordinary Seaman Edwin Frederick Daniels, who died on 10 March 1943, aged just 16, when his boat, MTB 622, was sunk by German destroyers off Terschelling.

By an unhappy coincidence, this was the very boat London Branch member Harry Leader (deceased) served on. Harry was fortunate to survive the sinking, but was severely injured in the process, and taken prisoner by the Germans. After an initial period of hospitalization, Harry found himself transferred to a POW camp in the heart of Germany, from where he was to eventually escape, making it all the way back to Allied lines! Harry was later awarded the DSM for his efforts in fighting the fire onboard MTB 622.

Chronik der Seekrieg only mentions that the MTB’s torpedos missed units of the 21st M-Flottille and no gun action with V-boote.

Convoy #410 was 15 nm off Wangerooge that night, but her escort did not include either of the mentioned V-boote

Can anyone confirm the British claim of damage?

That’s all I have

The British claim they came across an outer screen, apparently not part of the convoy, may an offshore patrol, and attacked it, but they may just have confused the whole matter.

I am aware of the sinkings of Hermod and Liège on 13/3. Strangely, Chromik der Seekrieg only mentions the loss of Hermod. BTW, she was Swedish, not Norwegian.

So there was 10 survivors with one who probably did this drawing of MTB 622 for Jim L’Esperance. 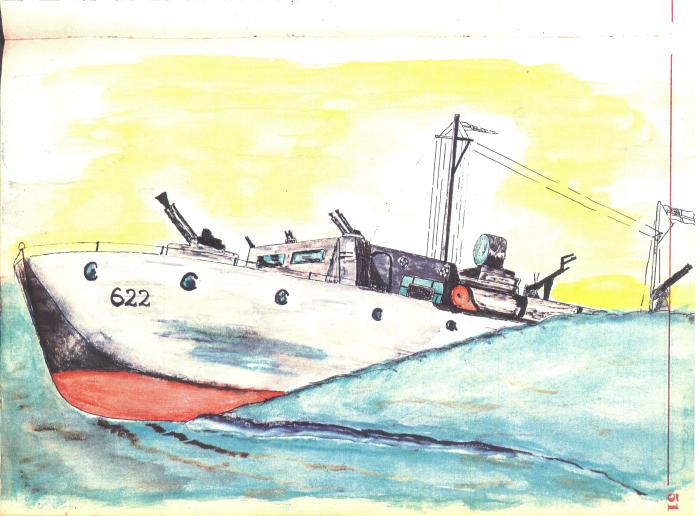 This is another sailor who was a survivor.

Richard Koval has this picture of Wing Commander Ledoux on his Website. 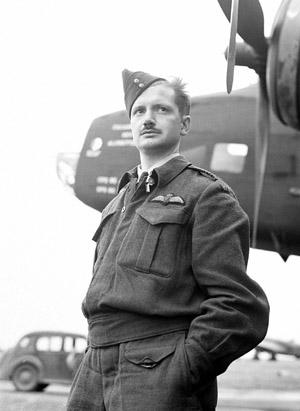 On 7th August 1944 this officer piloted a Halifax bomber on his first daylight attack over enemy troops southwest of Caen, Normandy, France.

As the run-in on the target was being made, cancellation of bombing was given by the Master Bomber. Immediately after leaving the target, the starboard outer engine failed, A flight of seventy-five miles was made into the North Sea where the bomb load was jettisoned.

The shortage of petrol was obvious and Wing Commander Ledoux captained his aircraft to the nearest English emergency landing base. Upon reaching this base, the weather had closed in and the aircraft was redirected to Mepal aerodrome. On the landing approach, another aircraft cut in front and an overshoot was necessary.

Undaunted by these circumstances, this cool and skilful pilot by his superb airmanship executed a safe landing with only a few minutes’ petrol left, without injury to the crew, and possibly saving valuable equipment.

Now for the other picture.

One survivor drew this for Jim L’Esperance almost 70 years ago. He did not sign his drawing so we will never know who drew it.

I found two survivors in my search for the unknown artist. I will tell you all about them next time.

I have a new reader on this blog.

I wonder if Richard knows this…

Believe it or not…

Jacques Morin was the last airman of 425 Alouette Squadron to touch ground in WWII.

His plane was the last one to touch down after the last raid.

The Alouettes’ parting fling at the foe was a daylight crack at gun batteries on Wangerooge in the late afternoon of 25 April, which came a week after a similar and even more satisfying blow at Heligoland, that flak and fighter outpost which had for so long been shown a hateful respect by bomber crews. When Command had done its deadly work, both islands were little more than cratered shambles. No 425’s last crew to bomb Festung Europa was led by Flt. Lt. L.R. Paquette, whose bomb-aimer, Flying Officer L.J. Mallette, pressed the bomb-release button at 1720 hours. The last to land after a flight over enemy territory was captained by Flying Officer J.E. Marcoux. When he eased “T”-Tare on to the Tholthorpe runway at precisely 1950 hours, the Alouette show in the heavy bombing campaign of the Second World War was a fait accompli.

Since he was the tail gunner, he was the last airman to touch ground. 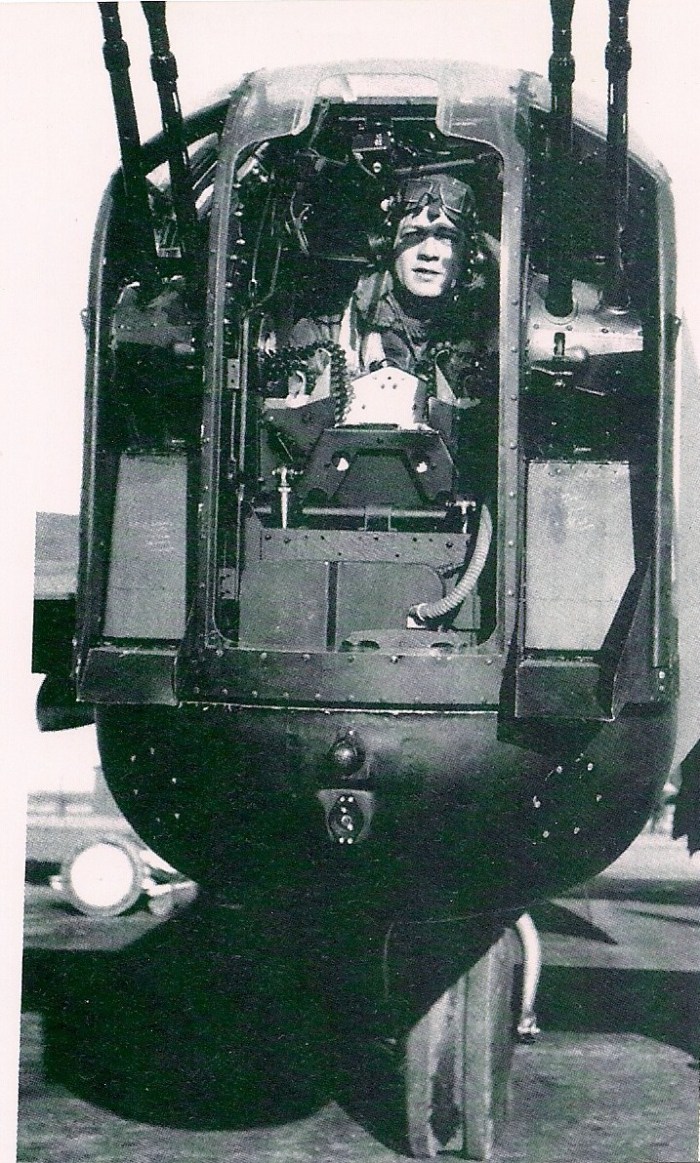 Jacques Morin is not pictured here on a Lancaster. It’s another tail gunner. 425 Alouette converted on Lancasters in early May 1945 too late for operations over Germany.

You can visit my other blog and enjoy all the pictures Jacques Morin shared. I have written more than 180 posts since April 2010.

Richard, I am so glad you’re back.

Richard Koval has been found!

After a frustrating series of attacks on the 6 Group website, we had decided to give it a rest. We had 3 attacks in a very short period of time in which the site was infected with malware that infected the computers of our visitors. Not a nice situation at all. In the meantime our domain name expired and we couldn’t access it to renew as it was through our former host who was no longer interested in hosting as the malware was causing a lot of grief.

We are now live again at www.6bombergroup.ca. Thanks to everyone for the concern and kind words about the site.

Did you look for information on MTB 622 as I suggested last time?

In my search, one information led to another to find more information about this drawing made by an unknown sailor who survived the sinking of MTB 622…

This led to this…

There were only 10 survivors.

This is another drawing made by a prisoner in Marlag und Milag Nord.

No name on the drawing!

Just a number on the side of the ship. I knew right away this was a MTB, a motor torpedo boat of the Royal Navy.

I will be back tomorrow, but you can start looking also if you are curious.

When Janet Mears of Australia started searching for information about her great-uncle Maxwell Cassidy, killed in a 1944 training accident in Canada, the results were astonishing. Not only did she discover that Max had been in love, she found the Canadian girl he left behind – alive and well, and eager to share her memories. That girl is my mother.