I WAS A SURVIVOR ON THE LOUISBURG, WAS QUARTER MASTER AND WOULD LIKE TO KNOW IF THERE ARE ANY LOUISBURG MEN ALIVE STILL AS I WOULD LIKE TO HEAR FROM THEM AS I AM NOW 91 GETTING ON A BIT BUT STILL A PROUD SAILOR.

I had received this comment on my blog Souvenirs de guerre…

My father, who survived the sinking of HMCS Louisbourg in the Mediterrean  in 1943, did not have very happy memories of the contemptuous and injust way Quebec sailors were treated on their ships and even after the war.

My father sustained an injury to his backbone, and his lungs were affected by toxic fumes caused by the fire on board the ship. This French-Canadian who was decorated never received a war veteran pension and we had to live in poverty until we settled in Sept-Îles during the industrial and housing boom of the town.

My father was even sent to the brig in Gibraltar because he defended himself against a Canadian who was constantly insulting him and other francophone crew members!!!

This person never wrote back.

I went on sailing on Google and found a lot of pictures.

Here are a few… 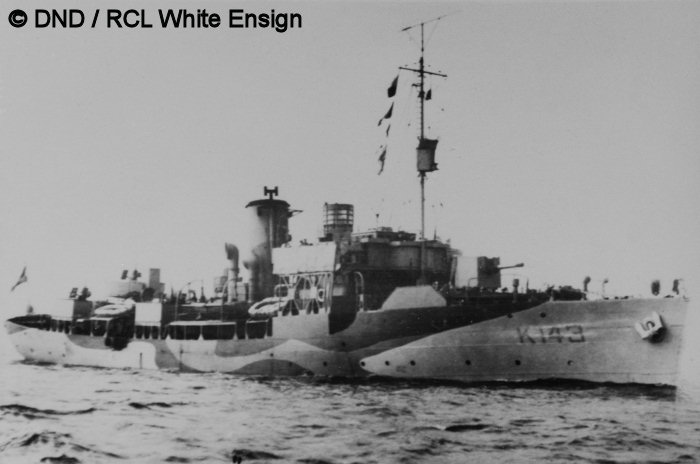 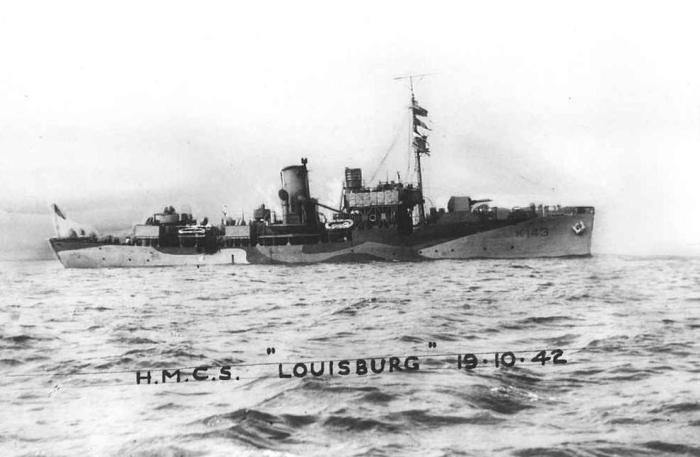 This how it was called, HMCS Louisburg and not Louisbourg.

The HMCS Louisbourg was part of the Flower class.

It was built by Morton Engineering and Dry Dock, in Québec. It was commissioned on October 2, 1941.
The Louisbourg was torpedoed off the coast of Oran on February 6, 1943.

Click here for the story of a sailor on a D.E.M.S. ship.

This is Jean-Denis Ledoux’s service record. 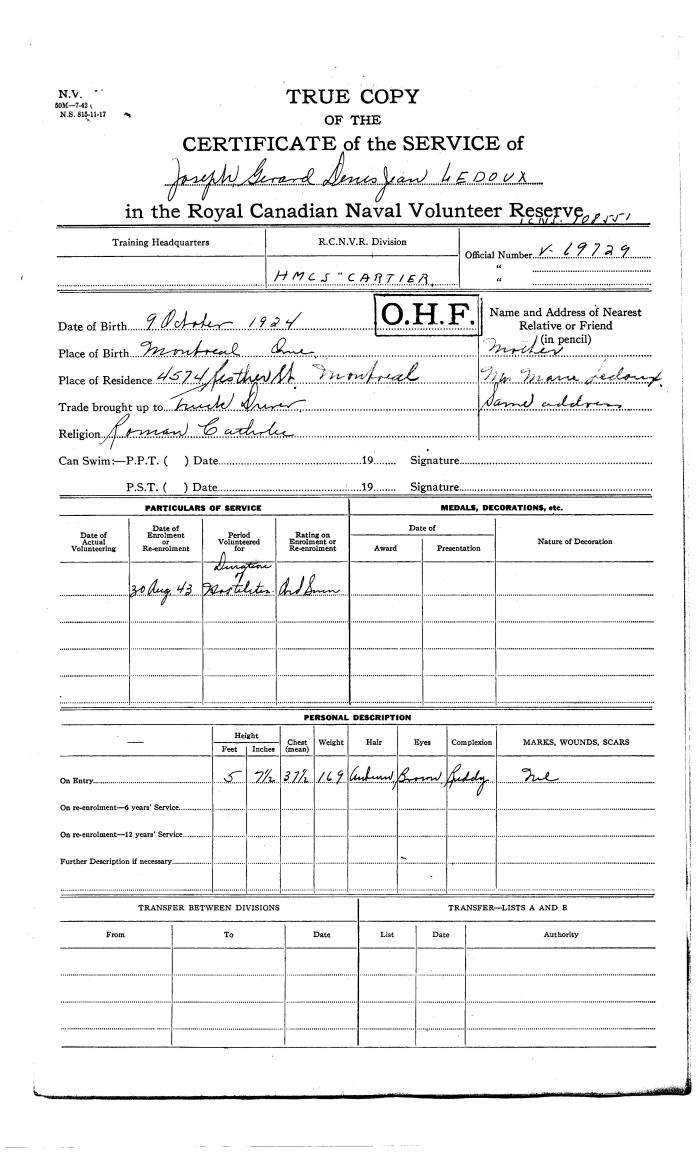 Now we can see on what kind of ships he served.

There is not many information on those ships. Click here.

We see in this picture Louis Ledoux’s brother. 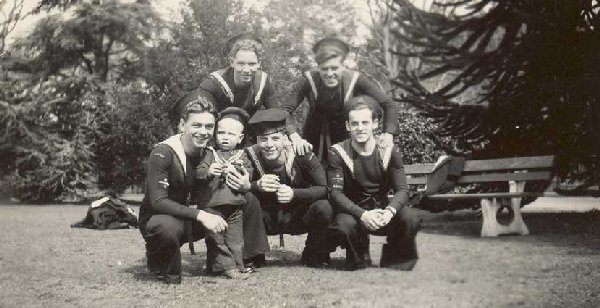 Jean Denis Ledoux is the sailor in the middle of the first row. He is among friends who are also sailors.

This picture would have been taken in 1943, maybe in Montreal in Lafontaine Park. Jean-Denis Ledoux lived in Montréal.

Réjean Ledoux is the one who posted this picture with others on the Veterans’s site. He is Jean-Denis Ledoux’s son. He told me his father was a gunner aboard a merchant ship.

That’s all he knows… for now.

This is another picture of Jean-Denis Ledoux. 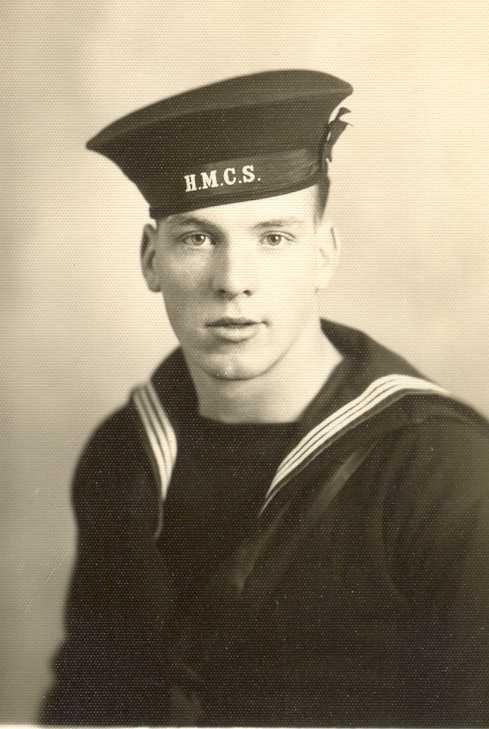 With this is mind, I went on the Internet to find more about those armed merchant ship.

This is what I found on the Internet… but I found much much more. But as an introduction, we will start with this.

This is a badge worn by sailors who belonged to this service.

So what… I’ve nothing to hide…

If the Allied powers had their spies lurking around behind the front lines, you can be sure the enemy was doing the same. Once again, you will find that I have certainly missed some of them and I am counting on you out there to fill in the blanks.

Takeo Yoshikawa began his career in intelligence in 1937 and became an expert on the U.S. Navy. He even received a thank you letter from Adolph Hitler after he informed the Germans of a 17 troop transport convoy that left Freetown and was en route to England; many of these ships were destroyed. On Hawaii, under the name Tadashi Morimura, he rented private planes and observed the U.S. installations on the islands. He would then transmit this data to Tokyo in PURPLE code; the U.S. did intercept these messages – but deemed them unimportant. When he heard the code, “East wind…

From a message sent by Jim L’Esperance.

Had to pass this on.

Old 666, B-17E 41-2666 was a World War II B-17 Flying Fortress Bomber which was assigned to the United States’ 43rd Bomb Group in 1943 and was the aircraft piloted by Lt. Col. (then Captain) Jay Zeamer on the mission that would earn him and 2d Lt. Joseph Sarnoski each a Medal of Honor, and every other member of the crew a Distinguished Service Cross.

The photograph above is the German U-boat U-215, first discovered in July 2004 off of Nova Scotia, Canada’s southern coast. This boat was credited with sinking the USS ‘Alexander Macomb.’ From 1939 until V-E Day, Canada’s Atlantic coast ports were extremely important to the resupply effort for the United Kingdom and later for the combined Allied offensive. There were frequent attacks by the German U-boats on the departing ships, especially after the United States entered the war. The submarines started battling along the east coast and the gulf from early 1942 through to the end of the shipping season of 1944. The American coast was an easy target for the enemy U-boats after Germany declared war on the U.S. Until the blackouts were enforced in May 1942, shipping vessels were silhouetted against such major towns as Atlantic City. This caused 348 ships to be sunk from February to May; with…