My father Jim William Hawley was on Regina the day she was sunk. We (I) can’t say enough about people like the captain of that cruise ship who was sensitive enough to allow this lady to read off the names of the young men who died that day. I also would like to pay particular attention to Able Seaman Malone whose actions that day saved the lives of all those who survived the explosion. What I don’t understand is why this young “hero” was never recognized as such.Thanks to this young man my dad was able to come home and raise a family, myself, brother John, Mary and Susan my sisters. What a legacy this kid left on planet Earth. If anyone out there knows anyone from his family in Three Rivers, PLEASE let us know so at least we as a family can thank them for their sacrifice. We have not nor will we ever forget Thomas Malone and all the sailors on that ship. My brother John actually visited the graves in England of T Malone and two other victims of that German sub attack. No will will never forget these brave “young” boys because that’s what they were.

I had found these ancestors.

The cruise ship I was on was passing a few miles away from Regina. I had the coordinates off the coast of Cornwall.  The captain had given me the time:  I read out loud the names of the thirty men-one was my uncle as we passed.

From his niece Patricia Holloway.

But thank-you to you all for so much information on this account.

Another one here. Also here and here.

My good friend Jim sent me this link in an e-mail… He got it from a friend.

Brave? They were scared witless. What made them heroes was defying that fear, raid after terrifying raid

Believe it or not…

Jacques Morin was the last airman of 425 Alouette Squadron to touch ground in WWII.

His plane was the last one to touch down after the last raid.

The Alouettes’ parting fling at the foe was a daylight crack at gun batteries on Wangerooge in the late afternoon of 25 April, which came a week after a similar and even more satisfying blow at Heligoland, that flak and fighter outpost which had for so long been shown a hateful respect by bomber crews. When Command had done its deadly work, both islands were little more than cratered shambles. No 425’s last crew to bomb Festung Europa was led by Flt. Lt. L.R. Paquette, whose bomb-aimer, Flying Officer L.J. Mallette, pressed the bomb-release button at 1720 hours. The last to land after a flight over enemy territory was captained by Flying Officer J.E. Marcoux. When he eased “T”-Tare on to the Tholthorpe runway at precisely 1950 hours, the Alouette show in the heavy bombing campaign of the Second World War was a fait accompli.

Since he was the tail gunner, he was the last airman to touch ground.

Jacques Morin is not pictured here on a Lancaster. It’s another tail gunner from a different squadron. 425 Alouette converted on Lancasters in early May 1945 too late for operations over Germany.

You can visit my other blog and enjoy all the pictures Jacques Morin shared.

Jacques Morin passed away on April 6.

He told me so when I met him last year at his home.

He did not have this picture. I found it on the Internet. 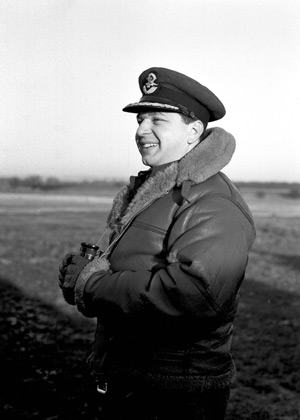 From the time of his arrival on No.425 Squadron, Wing Commander Lecompte has shown exceptional aggressiveness, courage and fine offensive spirit which have been an example and goal for all members of his squadron.

Wing Commander Lecompte tackles all his work with vigour and has spent many hours in the air on training each captain of his squadron.  That this has paid dividends is evidenced by the fine operational record attained by this squadron during the past months.  In June his squadron was awarded the Base Pennant for all around efficiency.

Wing Commander Le Compte’s organization of ground training, and constant and diligent attention to all phases have been of the highest order.  He is untiring in his efforts to press home to all crews by personal lectures, points of airmanship which he has learned over years of experience.

In addition to ground duties, Wing Commander Lecompte has operated on 21 sorties since February 1944 over targets in Germany, France and Belgium, including Berlin, Schweinfurt, Essen and Stuttgart.  His fine offensive spirit and keenness for operations has kept the morale of his squadron at a very high level.

In recognition of this officer’s devotion to duty and fine leadership I recommend the award of the Distinguished Flying Cross. [G/C J.L. Hurley, CO Station Tholthorpe].

– Mention in Despatches – Station Tholthorpe – Award effective 1 January 1946 as per London Gazette of that date and AFRO 322/46 dated 29 March 1946.  AFRO gives unit only as “Overseas”; unit found in McEwen Papers list of recommendations for MiD.

Who is Jacques Morin?

All my articles on him on my blog written in French about 425 Alouette.

In 2011 I visited HMCS Haida in Hamilton.

Let’s just say I got a little carried away…

Taken from the book Unlucky Lady

Photos of the book signing are on this site.

The Musée de la Défense aérienne de Bagotville will have an exhibition this summer on the 70th anniversary of RCAF 425 Alouette.

The book will be available at Archambault, Renaud-Bray and at the Museum. in Bagotville.