If you have any information about that squadron based in the Middle East during World War II, then write a comment below and I will get in touch.

There is already a Website devoted to this squadron. 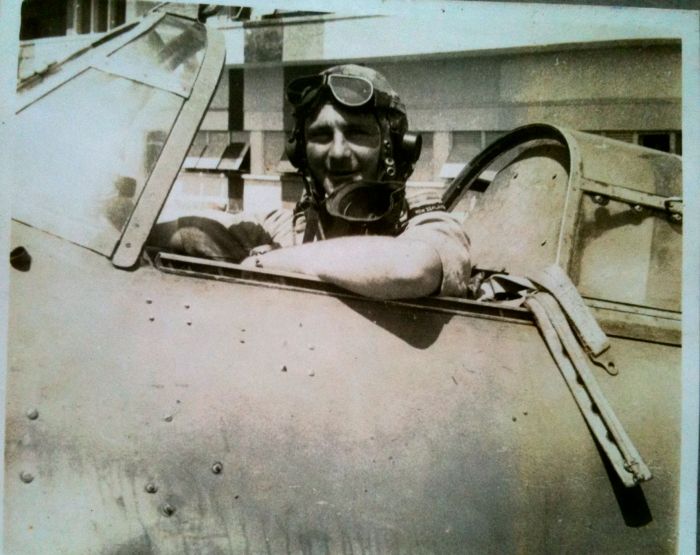 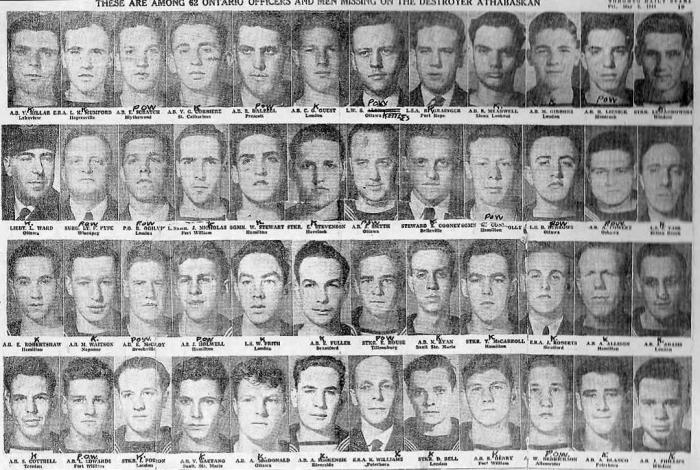 Elizabeth may be interested in this news clipping from the Toronto Star – her uncle is in row 3.  Also the photos of the Athabaskan’s
company that I had forwarded to you, with her uncle in row 1 that you included in your blog. 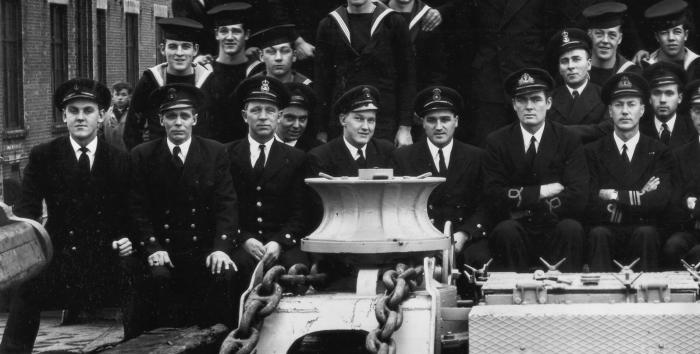 This story is so cute… 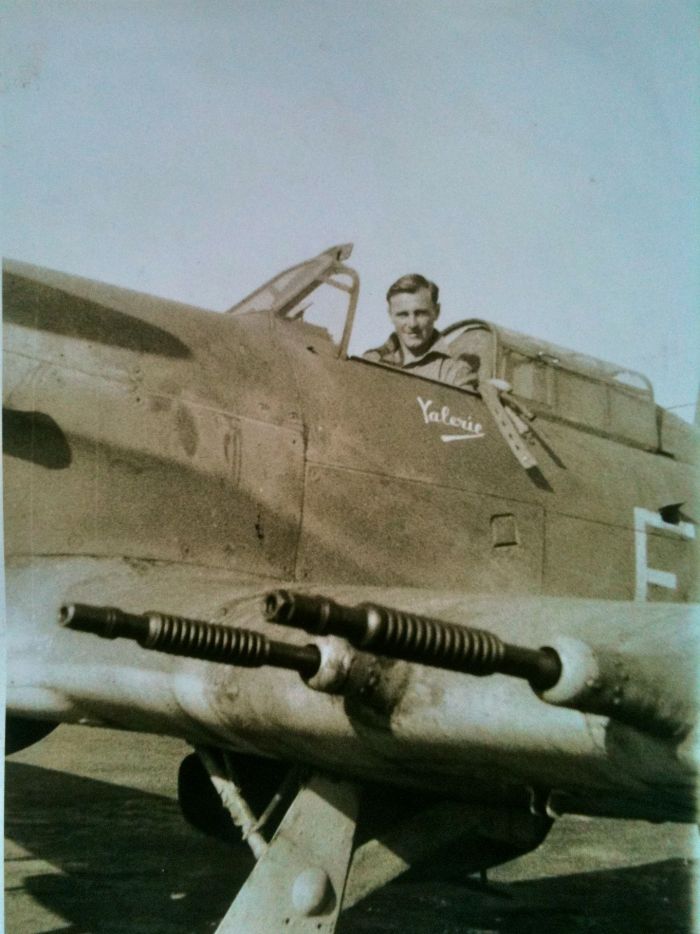 I told you it was cute.

If you know something, drop me a line or write Flight Lieutenant James Evans Jenkins’ daughter.

And they really had a good time,

This is what John Clark Roberts wrote his family living at 41 Duke Street, Stratford, Ontario.

John  Clark Roberts was an ERA 4, an engine room artificer aboard HMCS Athabaskan. 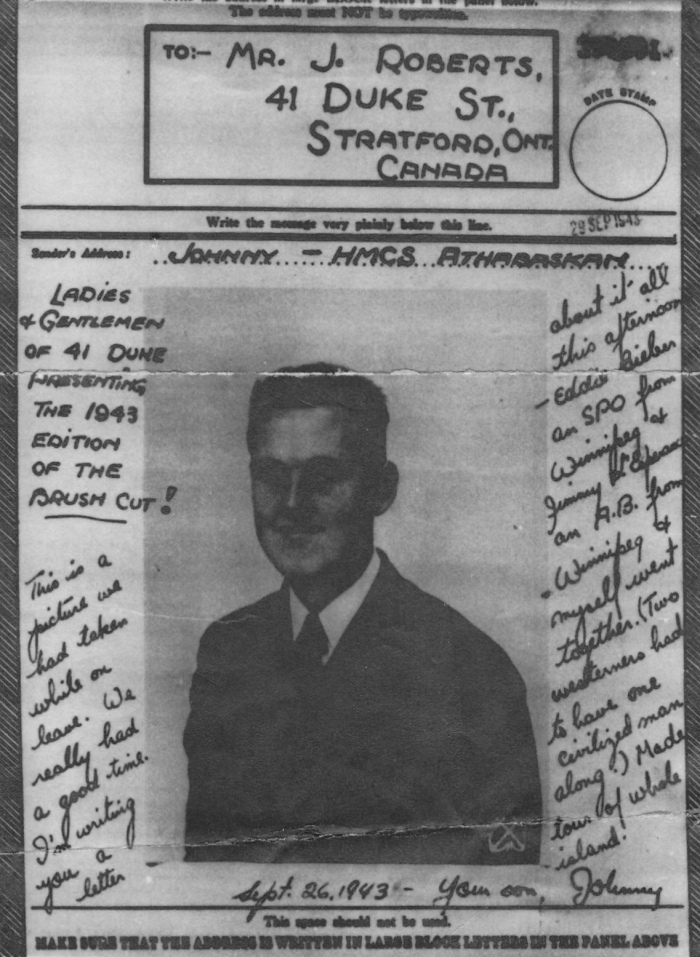 But which island did they visit?

This is an information on Stuart Kettles’ nephew’s site.

We have the timetable of HMCS Athabaskan.

After her commissioning on 3rd February 1943 at Newcastle-on-Tyne, she was assigned to the British Home Fleet but ATHABASKAN was plagued with mishaps during her very short service life.

In June 1943, ATHABASKAN took part in Operation Gearbox III, the relief of the garrison at Spitsbergen.

On June 18, she collided with the boom defence vessel BARGATE at Scapa Flow, resulting in a month of repairs at Devonport.

In July and August of 1943, she was based in Plymouth, carrying out anti-submarine patrols in the Bay of Biscay and…

August 27, 1943 she was hit by a glider bomb off the Spanish coast. She managed to reach Devonport where she remained under repair until November 10, 1943.

Returning to Scapa Flow in December 1943, she escorted convoy JW55A to Russia but in February 1944, rejoined Plymouth command and was assigned to the newly formed 10th Destroyer Flotilla.

On 26th April, 1944, she assisted in the destruction of the German torpedo boat T 29 in the Channel off Ushant.

Three days later on 29th April, 1944, was sunk by a torpedo from T24, an Elbing class destroyer, north of the Ile de Bas. Her Captain, John Stubbs and 128 men were lost, 83 taken prisoner and 44 rescued by HAIDA.

Which island did they visit?

In September 1943, the ship was under repair in Devonport. So which island was it?

The only island close by is Drake’s Island. 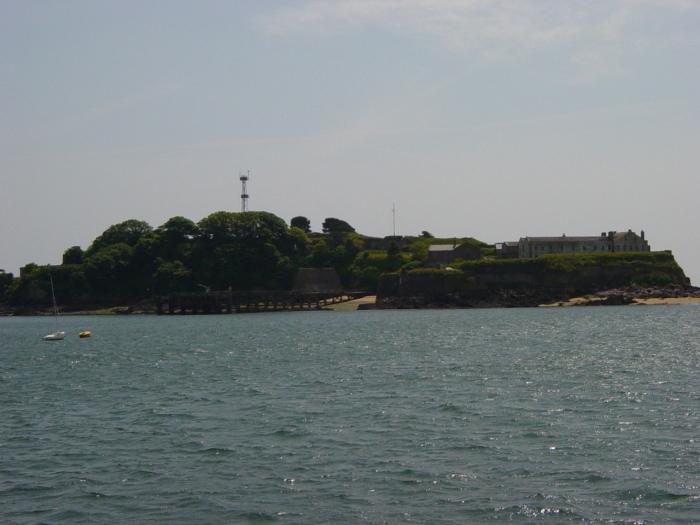 We will probably never know for sure.

Why is this information so important?

He wanted to see his nieces and nephews.

We were sitting in the living room when we started talking about his brother Jean who was wounded on Juno beach.  He said he was a sailor on HMCS Athabakan. He did not say much like some many veterans.

He said he was writing a letter in the engine room when the ship was torpedoed. The next thing he remembered was that he was rescued.

John Roberts and Eddie Bieber did not have that chance. They were listed as MPD… Missing Presumed Dead. 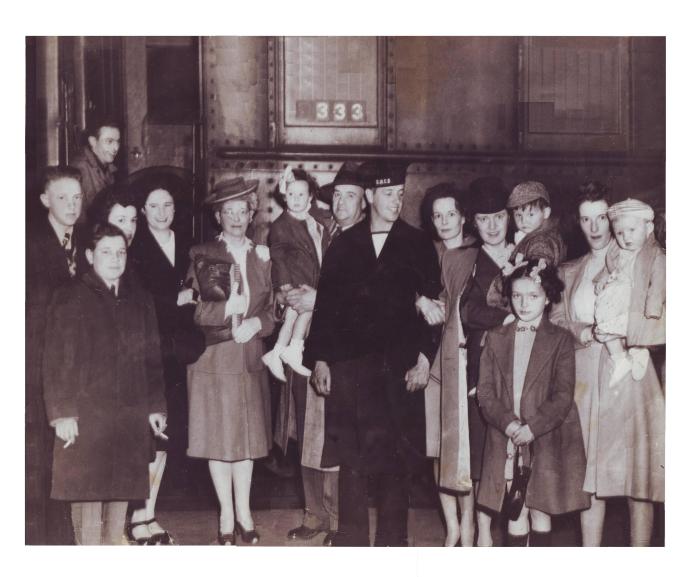 His story is in this blog which pays homage to these young men who served on the Athabaskan and gave their lives or their youth to defend our country. 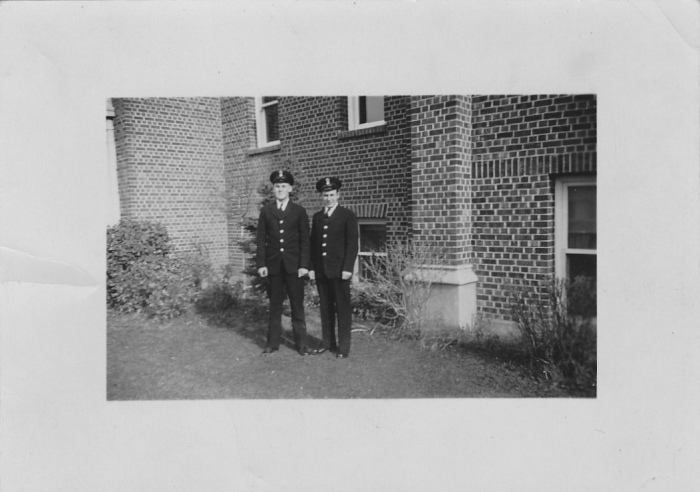 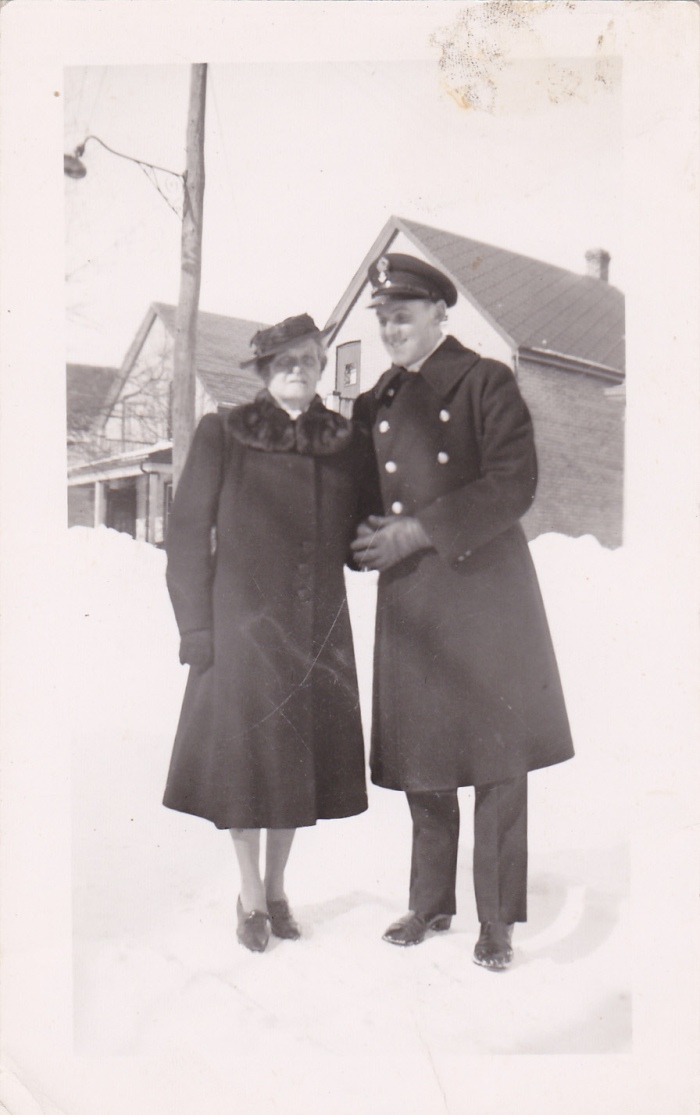 John and his mother 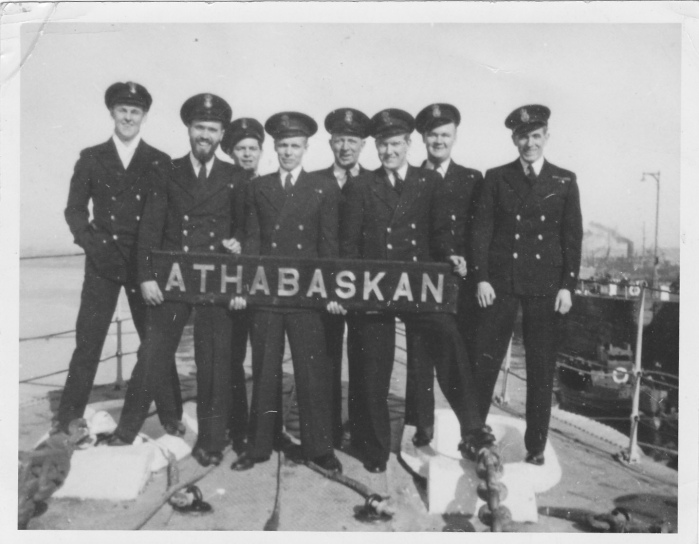 John and the crew of the engine room 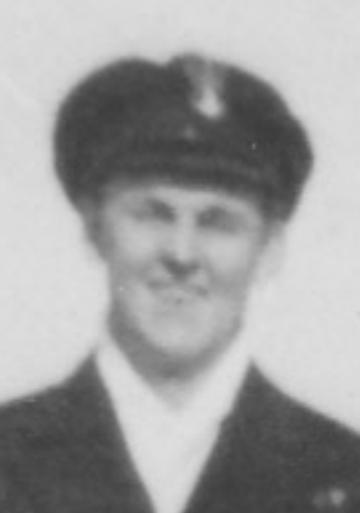 “On all the oceans where whitecaps flow,

There are no crosses, row on row;

But those who sleep beneath the sea,

sleep in peace…your country is free”

I have taken your email address from an email that I received from Sherry Pringle. My uncle John Roberts was lost at sea on the Athabaskan.

John’s brother-in law passed away this year and I was going through family memorabilia and found a copy of a postcard  that had been sent  from John, dated Sept. 23, 1943: John  said the picture in uniform showing his new hair cut was taken while on leave: he mentions that an Eddie Bieber and Jimmy L’Esperance (from Winnipeg ) toured the whole island together.

I have no idea which island perhaps Greenland ?

I have a picture of the Athabaskan anchored off the coast of Greenland .

Anyway, I guess I wanted to ask if you are the son of Jimmy or a relative of his by the same name and/or if you had heard mention of my uncle at all in your Dad’s stories? I so wish we could have met him before he passed.

I was taught to be proud of my uncle and grateful to all those that lost their lives  and to never forget. I have followed the history of the ship through books like the Unlucky Lady and now Sherry’s wonderful personal stories in All the Ship’s  Men, including the unique story of your father.

I will appreciate your response at anytime, and certainly understand if you have no information forthcoming …just long shot!

Jim knows how much I know about the Unlucky Lady.

I wrote Elizabeth… and she wrote back.

I am so pleased that Jim has given me your contact information.

I would appreciate any information that you might have about my Uncle: anything that I was able to glean from  family members was always so sketchy. They could never talk about it. John’s father  was sure that if he had survived the blast, that because he was a strong long distance swimmer, he could have been either picked up by a German ship or actually made it to shore on his own. It took him till the end of the war to finally accept that was not the case.

I have done some investigation and  believe that John was on duty at the time the ship was torpedoed and therefore would not have had a chance.

I do know one story, that we have not been able to follow up. Apparantly, a buddie of John’s was on leave (I do not know if he was on the same ship or not ) and had a “hot date” with one of the commander’s daughters. John’s overcoat was new issue and so he loaned it to this fella to wear in place of his well worn one.

His nickname was “Blackie”.

After the war, he came to John’s home in Stratford and returned the coat: he had along talk with my grandfather, who would never talk to anyone about it! John’s mother died from a terrible accident falling from a  second floor porch not long before the ship went down: the Captain was given the task of informing  John while at sea. When word was heard of John’s death, the family of course said it was best that she never knew that her son was killed. Everyone  handles sorrow and death differently.

I had an opportunity at a recent family funeral to find some pictures of John in uniform that I had not seen before; I will attempt to get them scanned through our office and forward them to you. Of particular interest is a copy of a postcard he sent with a very brief message.

My mother remembers reading letters that came home with big black strokes throughout as they were all screened to remove any information sensitive to the war. We have no idea what happened to the letters. We think that my grandfather burned them.

I sincerely thank you for any info forthcoming. I so wish  that I had had the  interest earlier in life to investigate while family members were still living, but I never remember my grandfather mentioning his name as I was growing up. When he lost his wife and then his son, he just became quiet. His first born grandson was named after John:  said to be the spiten image of his uncle with the same outgoing easy personality. He was killed outright on a motorcycle at the same age as his uncle. My Mom is now 94 and what little she seemed to know is now forgotten.

I am putting together a family tree for my children, who have been taught the same as I was… to be proud of those that served and  gave  their lives, particularly as we lost a  family member. But I have been thrilled to see the attention paid to the service of those on the Athabaskan through the books like the Unlucky Lady and Sherry’s wonderful All the Ship’s Men.

John was an excellent artist and I was hoping that some of his work might have appeared: as a young boy he loved to draw ships and instead of continuing his education at university, he voluntarily joined the Navy as so many young men did.

Thank you for your offer of assistance and I will get what few pictures I have off to you.

Next Monday, I will be going out to sea and see what I can find out on John Roberts ERA 4. 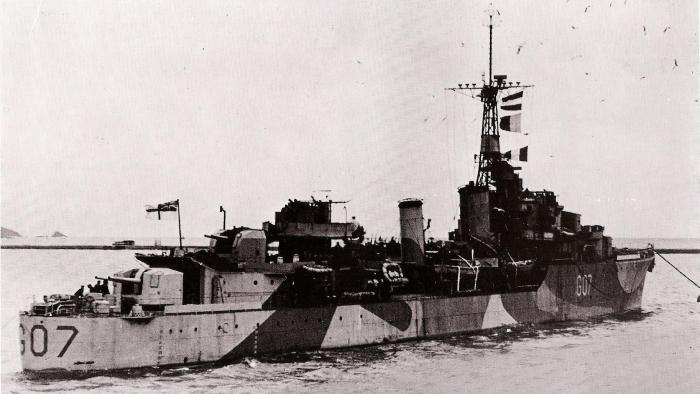 Someone wrote me about John Roberts who was a sailor aboard the Athabaskan.

In memory of
Engine Room Artificer
JOHN CLARK  ROBERTS
who died on April 29, 1944

Son of James and Elizabeth Roberts, of Stratford, Ontario.

More information on the way…