Jean-Maurice d’Avril was killed while he was being transfered to a prison camp.

The precise date of his death is still unknown according to Peter Hessel.

His death occurred around March 6, 1945, in Frankenberg.

Son of Henri and Cecilia D’Avril, of Montreal, Quebec.

I met someone who wrote me a comment on my French blog Souvenirs de guerre.

Come back next time for the story.

This blog is all about sharing memories.

No adds unless you visit sites where I send you sometimes to give more info.

I shared the story of the sinking of the Athabaskan.  I shared what some family members shared with me, namely Jim L’Esperance’s son and one of his daughters.

I shared the sorrow of Adrien Tremblay’s mother whose son was part of the régiment des Fusiliers Mont-Royal. Adrien was killed on December 17, 1944 in Holland. She always believed he would come back.

I shared a lot more…

But sharing can be  sometime  painful.

Paul Sauvé was a Quebec lawyer, WWII veteran and politician. He was the first Quebec Premier to be born in the 20th century.

When Canada entered the Second World War in 1939, Paul Sauvé reported to the Fusiliers Mont-Royal, the regiment to which he belonged as a reserve officer, and served overseas in the Canadian military for the duration of the Second World War, and took part in the Normandy landing. In 1945, he came home from the European front and resumed his official duties with the Quebec government. In 1946, he became the first cabinet minister for Social Welfare and Youth, a ministry just created by the Quebec government.

After the death of Premier and UN leader Maurice Duplessis on September 7, 1959, Sauvé succeeded him in both positions. He also retained and cumulated the position of Minister for Social Welfare and Youth while Premier. Sauvé died in Saint-Eustache while in office on January 2, 1960, of a heart attack after having served as premier for only 112 days.

Paul Sauvé was the one who started what was called later la Révolution tranquille putting Quebec in the modern era.

Sauvé was also one of the many Quebecers who enlisted and go overseas to fight for freedom.

To this day the myth about Quebec participation in WWII still persists.

Someday the true story will emerge.

Paul Sauvé and I are related by my mother’s ancestors.

I just got an e-mail yesterday.

Happy New Year and all the very best to you and your family in 2010.

I am enclosing a photo taken in 1942 of Lionel Senecal. I have not edited it because I am not familiar with the process. Please advise if you can do this and if not I will work on it myself.

There are additional pictures on their way of the cemetery in Plouescat, France.

Monica gave me permission to show you the pictures.

Here is one she sent me. 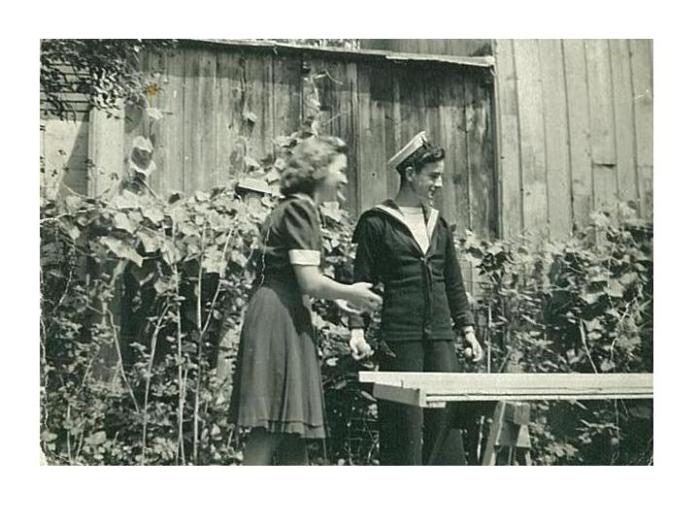 In memory of
Able Seaman
JEAN GEORGE LIONEL  SENECAL
who died on April 29, 1944

I will take a break posting articles on this blog.

I will probably get back to you if I get more messages from family members of the Athabaskan’s crew.

This will be the introductory article on Paul Sauvé.

If you know the man, then write me a note in the reply section.

If not, then come back tomorrow.

I have some translation work to finish.

We had another family reunion in Monkland near Cornwall last Saturday.

My wife’s uncle was there with his two daughters. He is the reason why I have been writing this blog since August…

This is the first article.

If you have been reading most of my articles, then you know how many people helped me in my quest.

My wife’s uncle has changed a lot since August when he briefly talked about the Athabaskan. He looked very weak and frail. His mind was sharp though.

My brother-in-law had found a box of old pictures. Everyone wanted to look at them. Pierre could identify everyone, and I mean everyone. He even recognized an old flame and said he would marry her on the spot…

He also talked about his brother Jean who was wounded on the beaches of Normandy. Jean was with les Fusiliers de Mont-Royal. I told Pierre that Les Fusiliers did not took part in the invasion but landed in Europe in July.

He was adamant about it and told me how is brother was wounded when he set foot on the beach. As I see it Jean was loaned somehow to le Régiment de la Chaudière and was wounded on the beach.

As I told you a long time ago, Pierre’s name was not in the list of sailors who were on board the Athabaskan on April 29, 1944.

I know he does not want to talk about his ordeal, but I know now I am certain of what he went through that night.

Now that I know all there is to know about my wife’s uncle, this might be my last article… If I were you, I would come back tomorrow…